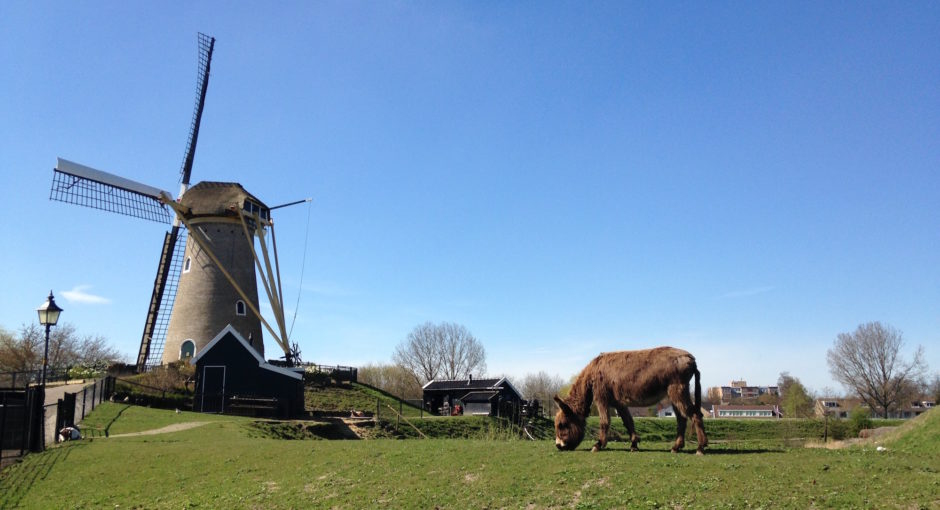 The Donkey at the Windmill

You probably have heard about the spring classics, Milan San Remo, the Tour of Flanders, Liege-Bastogne-Liege, The Amstel Gold Race, or the Paris – Roubaix. I have my own spring classics, biking through the flower fields near Lisse and up along the North Zee beach between Noordwijk and Zandvoort. This is what you can experience in my spring classic.

My spring classics are three rides that I do every spring since I came to the Netherlands. The rides are:

A Bike Ride To The North Sea Beach Near Amsterdam

The final ride of the spring classic The Dune and Bulb bike ride starts in Osdorp, Amsterdam.

You get the ride started by riding up Baden Powellweg in Osdorp, Amsterdam. I will make the assumption that the street has been named after Robert Baden Powell the Scouting Movement founder.

Passing by the outlets, I come upon the cemetery Herdenkingspark Westgaarde, a beautifully designed cemetery, so peaceful. Then continuing on Ookmerweg, I cross over Rignvaart, passing through Lijnden business park to reach the Hoofdweg.

Hoofdweg slices through the Schiphol airport, riding down the hoofdweg you passing under the A5 highway and the Schiphol runway that is used by planes when the taxi from and to the north-west runway at Schiphol.

Biking down this road you will definitely experience a plane taking off or landing, no different on this sunny day.

Hoofdweg is straight for 5 km, tills you reach the city of Hoofddorp. Hoofddorp was created after the draining of the Haarlemmermeer, two villages, Kruisdorp (Crossvillage) and Venneperdorp (Vennepervillage), were founded in the center of the polder.

In 1868 they were renamed to Hoofddorp and Nieuw-Vennep respectively. Hoofddorp became more prosperous than Nieuw-Vennep, and it rapidly became the most important place in the district.

Hoofddorp was part of the Defense Line of Amsterdam. A fort was built next to the main canal, A large dike known as the Geniedijk (Engineers’ dike) connected the fort at Hoofddorp to the batteries and the casemates, and ultimately to the fort at Vijfhuizen in the west and the fort at Aalsmeer in the east.

In 1856, the first windmill was built in the center of Hoofddorp. It was called “De Eersteling” (The First). In 1977 the mill was moved to near fort Hoofddorp. It’s open to the public.

The Hoofdweg will take you all the way to the Buitenkaag, where you can cross over the Ringvaart and if you so want bike onwards to Leiden, Den Haag or what your destination will be.

I just road the Hoofdweg to Nieuw-Vennep, as I was heading towards Lisse.

I road through Nieuw-Vennep and just after the town turned on to a bike path going through the Venneperhout park towards Lisserbroek.

Lisserbroek is a village located along the Ringvaart opposite the town of Lisse in the area called the “Dune and Bulb Region” (Duin- en Bollenstreek).

Crossing over Ringvaart, I entered the town of Lisse. Lisse goes way back, in a document from 1198 the town’s name is mention, Lisse celebrated its 800-year anniversary in 1998.

In the Middle Ages, Lisse was a small settlement, poverty was prevalent. Its population lived from agriculture, animal husbandry, and peat harvesting.

In the 17th and 18th centuries, Lisse was, like Hillegom, home to many estates of rich merchants and nobility. The forests and gardens of the Keukenhof, Meerenburg, Wildlust, Zandvliet, Overduin en Akervoorde, Wassergeest, Grotenhof, Ter Specke, Dubbelhoven, Rosendaal, Veenenburg en Berkhout, Middelburg, Ter Beek, and Uytermeer estates all added to the town’s beauty and glory.

In the following centuries, every one of these estates (except Keukenhof) was removed to make way for the cultivation of bulb flowers. The sandy soil in Lisse’s surroundings was highly suitable for its growth provided the soil was fertilized. The nearby dunes were excavated and forests cut down progressively overtime for more fields for the flower business.

Riding through the flower fields at this time of the year is fantastic, the air is fragrant from all the different types of flowers that grow in the fields. My favorite fragrant on this day is lavender.

I’m now approaching the dunes, at the Snackkar de Ruigenhoek, I get on to the bike path that goes through a wooded area before you reach the dunes.

Along the bike path I pass by the Kennemer Zweefvlieg Club, at the club you can experience flying in a glider (sailplane), on this day there were a lot of activities at the club, and I just passed by when one glider was launched, so cool.

Reaching Langevelderslag road I made a right turn to head towards the beach at the strand.

Reaching down to the Strand – I made a left turn onto the bike path that connects Noordwijk with Zandvoort through the Dunes.

The bike path that goes through the dunes, is really fun to bike as it’s up and down no major hills a few inclines with runoffs. On today’s ride, I was wearing my bike jersey that has the “Back to Ride for a living planet” printed on it.

As I was passing cyclists on the path, I heard someone call out, I did not think it was for me so I just stepped on it up the next incline, on the downslope an older guy than me, came next and gave me a compliment for my bike jersey. After he had given me the compliment he dropped back and I was riding the last kilometers to Zandvoort by myself.

Zandvoort was really busy, after all, it was Sunday and the weather was sunny, lots of people around, lots of traffic.

Read more about Zandvoort in this ride I did a few weeks earlier.

Riding along the beach on the bike path, I came to Bloemendaal aan Zee, where I turn and ride towards Haarlem.

Read more about Bloemendaal Aan Zee in this ride I did a few weeks earlier.

Coming from Bloemendaal aan Zee direction, I rode through the city of Haarlem, and passed by the Station Haarlem, through the industrial district, and at Ikea Haarlem, I turn down on the bike path that follows the train track that goes towards Halfweg and Amsterdam.

The bike path narrows near Buiten liede, and the bridge is a small narrow wooden bridge, I carried on down the Oude Notweg passing by a horse stable, crossing under the A9 highway and a few more farms before reaching Halfweg.

Along the Oude Notweg animals had been let out and run around in the fields or just grazing on spring grass, there was horses, sheep, and longhorns.

In Halfweg I bike passed the Station Halfweg-Zwanenburg down to the traffic light, where I crossed over the Haarlemmerweg.

I turn on to the Osdorperweg and followed it all the way down to Baden Powellweg were I had got started a few hours earlier. A great ride – you should try it.

Are email reaching the end of it’s lifespan

Know your file types for the web 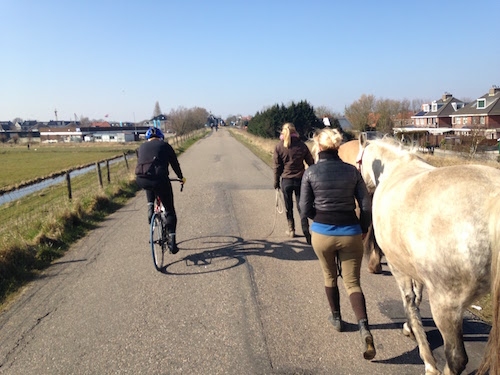 A bike ride to the North Sea beach near Amsterdam

Even cyclists need to do yoga